Join us for an Easton tradition: the Lighting of the Easton Peace Candle! 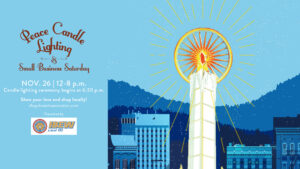 For decades, Easton’s Peace Candle has stood as a visual reminder and call for peace. It stands 106-feet tall and is displayed from mid-November to mid-January around the Soldiers and Sailors Monument in Centre Square. The Christmas Candle (as it was called) was first lit in 1951 at an interdenominational program in honor of those serving in the armed forces. Viewers gazed at a 75-foot-tall red candle, topped with neon yellow lights, its base encircled with evergreens. Over the years it’s been used as a call to peace. In 1972, a petition wanted the candle up until the Vietnam War ceased (which wouldn’t come until 1975). The petition was denied, but a 1990 petition to keep it going until the First Gulf War was over was granted. City officials maintained the Peace Candle until Feb. 28, 1991, adorning the base with yellow ribbons.

Growing pains: Over the last 30 years, the candle has undergone a series of upgrades to keep it burning bright. In the 1960s, Easton went several years without a candle after several harsh winters deteriorated the plywood structure. It sat for five years in storage, until residents asked to repair and bring it back in 1966. The candle lasted for two more seasons. By 1968 it was clear – the Peace Candle needed a durable frame. A new fiberglass frame carried the Peace Candle to 1990. In 1990, the candle received an overhaul that made it taller, and delivered a white candle with blue wax drippings — believed to be the largest non-wax candle in the U.S. In 2012, the Peace Candle got a $25,000 upgrade to its steel frame and a new look — a white body and off-white drippings with red lights in the evergreens. Peace Candle shares were sold for $20 to offset repairs.

A lasting tradition: Today the candle lighting has become a full-fledged festival with carriage rides, ice sculptors, gingerbread house contests, and a visit from Santa. Since 2013, Easton Main Street Initiative, the Greater Easton Development Partnership and volunteers have organized the Peace Candle Lighting/Holiday Open House. It kicks off the holiday shopping season in Downtown Easton, and coincides with Small Business Saturday. There’s a lot of work that goes into the annual effort. City maintenance workers repair and repaint the candle each year. Since 1981, Beatty Contractors has hoisted the candle up with its crane at a reduced rate. In 2009, the right to light the Peace Candle went to the highest bidder, a tradition that continues today. And Light a Night sponsors donate to keep the candle lit each night through the holiday season. Whether you’re coming for your very first time, or you bring your family each year, we welcome you to share in this tradition with us. May it be a festive kickoff to your holiday season!

Small Business Saturday is a push by American Express to encourage shoppers to support their local, small businesses during the holiday season (and all year round)! Many of our Downtown Easton businesses will be offering special promotions and sales throughout the day.