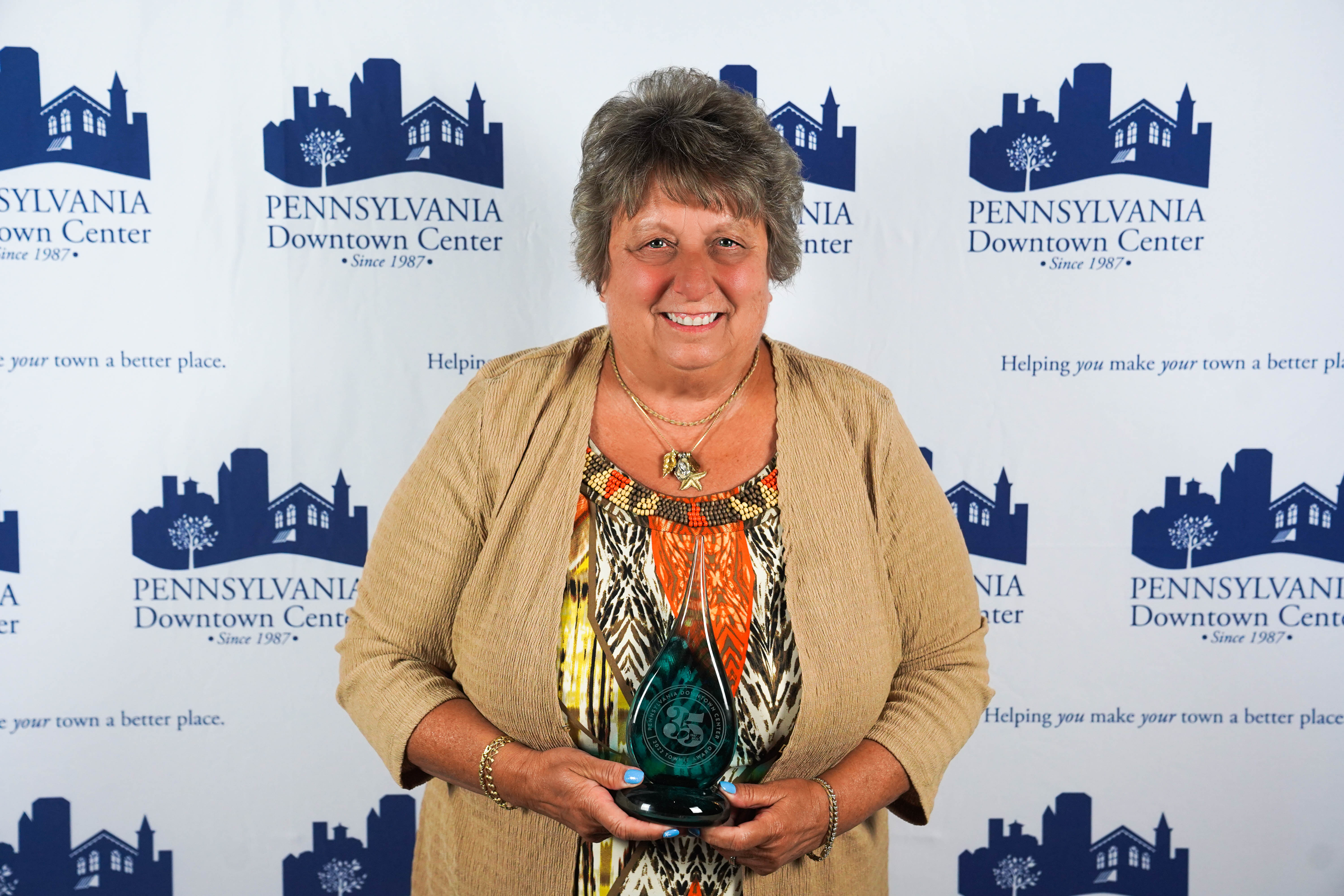 JoAnn Durante, a long-time volunteer for a variety of Greater Easton Development Partnership’s initiatives and events, was recognized as “Volunteer of the Year” for 2021 at the Pennsylvania Downtown Center’s (PDC) annual statewide Townie Awards gala, held in downtown Harrisburg this past June.

For eight years, Durante has volunteered her time, her love of her hometown, and her energy with the Events Committee of Easton Main Street Initiative (EMSI), a GEDP program. Many see her working the info booth during Easton Out Loud (a fourth Friday series) and Easton Heritage Day as well as slinging garlic knots during Garlic Fest and bacon knots during PA Bacon Fest to raise money for EMSI.

But from October to December, Durante has treated her volunteering like a full-time job as she logs more than 40 hours per week to help transform Easton into a holiday destination. In past years, Durante played a significant role in planning the annual Peace Candle Lighting & Small Business Saturday. She introduced a Breakfast with Santa, commemorative buttons, a gingerbread house contest and the Pocket Lady — a volunteer who hands out small treats to passersby.

In 2020, as Easton’s mayor introduced Easton’s Winter Village, modeled after a European open-air market, Durante wholeheartedly threw herself into the planning and execution of the five-week event. She staffed the North Pole hut, coordinating Santa’s visit to Easton and encouraging families to share their letters with him. She also helped to coordinate the entertainment.

In 2021, she reprised her role as part of the Easton Winter Village Committee, helping to organize details as the event grew from 20 huts to 27. Leading up to the event, JoAnn solidified the entertainment schedule, arranged for costumed characters to stop by, encouraged the inclusion of a diverse group of Santas, and supported the planning committee. She also single-handedly made 244 red bows for each of the wreaths that decorate the businesses in town to add a festive feel to EMSI’s holiday decorating campaign.

“EMSI relies on over 300 volunteers throughout the year. We couldn’t do what we do without them,” said Kim Kmetz, TITLE. “We count ourselves lucky to have a volunteer like JoAnn who has donated so much time and energy to our nonprofit. She embodies the heart and soul of the city, and her efforts have helped countless families to make treasured holiday memories in Easton year after year.”

The Townie Awards are a festive and venerable tradition designed to recognize the commonwealth’s core communities and individuals for creation and implementation of projects, programs and events that exemplify the goals of PDC’s community revitalization mission. Eligible communities consist of Pennsylvania Downtown Center’s nearly 200 member organizations, including Main Street and Elm Street programs, making the Townies a competitive award process each year.