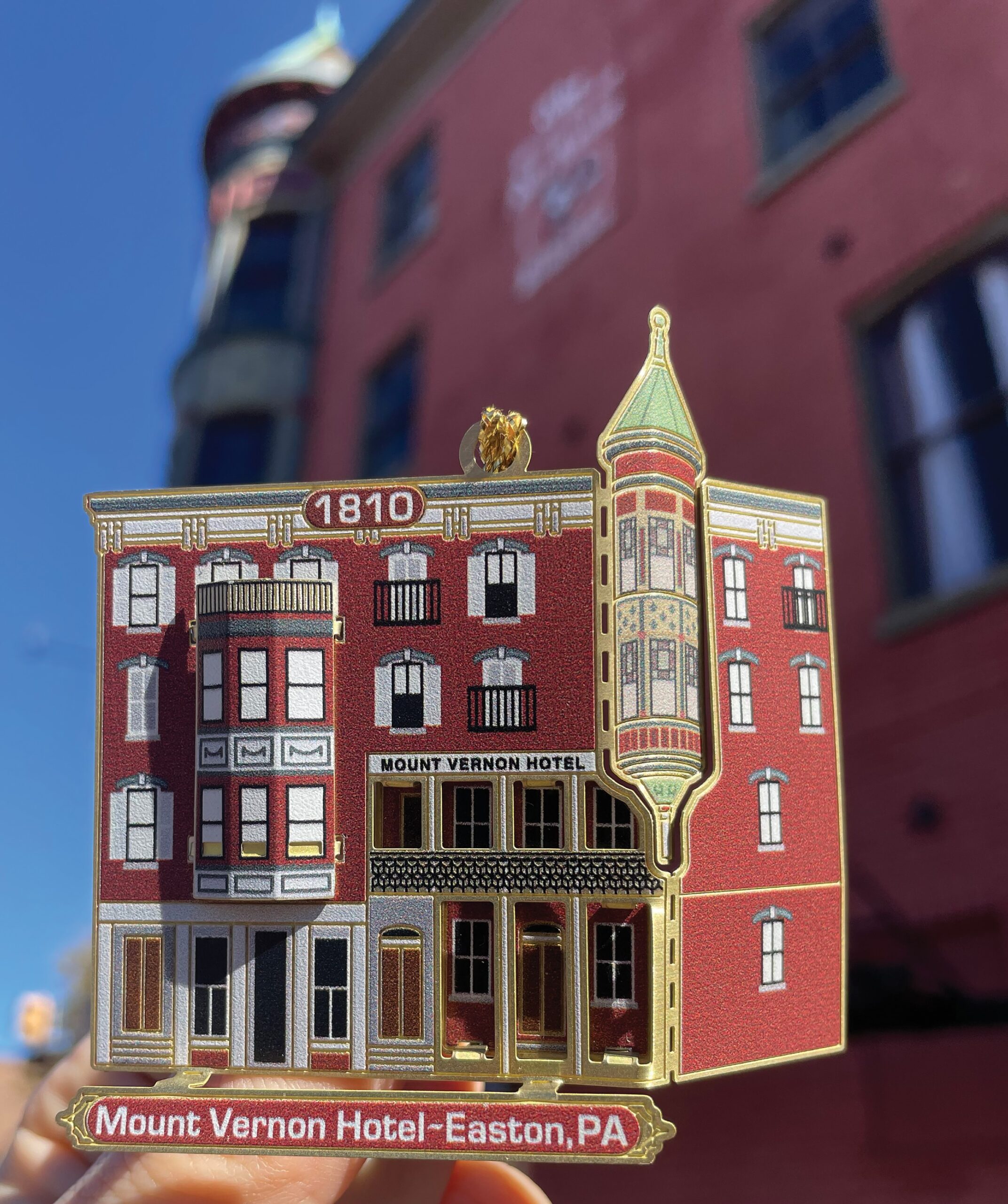 The ornaments cost $20 and are available at store.shopdowntowneaston.com, at select merchants in Downtown Easton and at the info tents at the Easton Farmers’ Market and the Easton Winter Village, which opens Nov. 18. Proceeds from the ornament sales support EMSI, a program of the non-profit Greater Easton Development Partnership, and help offset holiday events and programs EMSI hosts.

Only 750 ornaments are available for purchase. Several past ornaments have sold out. The Mount Vernon Hotel joins eight other cherished Easton landmarks and symbols memorialized as ornaments: The Peace Candle, Easton Bugler, Easton Farmers’ Market, Northampton Street “Free” Bridge, State Theatre, Cottingham Stadium, The Carmelcorn Shop and Laubach’s Department Store. The volunteer EMSI Events Committee selects the ornament subject at the beginning of each year. Ornaments are crafted in the USA by Beacon.

For many Eastonians, purchasing an ornament is a holiday tradition. “People look forward to the announcement of the new ornament and adding it to their collection every year,” said Kim Kmetz, Main Street Manager for EMSI, noting that more than 7,000 ornaments have been sold since the program’s inception. “We ship them all over the United States. People want a piece of Easton wherever they live.”

About the Mount Vernon Hotel

The building at Sixth and Northampton streets holds a rich history. Much of the original construction has remained untouched. Two Rivers Brewing Company opened in the former Mt. Vernon Hotel in 2012 and occupies the first two floors of the building.

The structure was built in three sections. The oldest section fronts Northampton Street and dates to about 1810. The middle section was built around 1850 and the rear section in the 1920s. The earliest found records indicate the building operated as a hotel continuously from 1855 until 1994. It even served as a brothel at times.

Helen Snyder, who operated the Mt. Vernon from 1948 through 1992, was quite a fixture in Easton. Two Rivers Brewing has paid homage to her by hanging a painted portrait of her near the exits on the Sixth Street side of the bar room. The room she is standing in is what the bar room once looked like.

The first floor bar room is relatively untouched. The beautiful 1920s vintage tin ceilings were repaired and painted. The original milk glass lighting fixtures and terrazzo floors needed only minor repairs and cleanup. The focal point of the room is the 1929 Zenith Radio Bar, purchased by the owners during that period as a kit from the Sears Catalog. The building’s prominent Victorian era turret has an unknown past. It is not original to the building, and stories exist that it was added on as part of a lost bet at some time in the late 1800s.